Sociopaths, Psychopaths and Antisocials, Oh My!!!!

Four titles on Evil: The Sociopath Next Door, The Psychopath Test, Confessions of a Sociopath, and Dark Nature: A Natural History of Evil

Lately books on these topics have been all the rage...rage from the victims!
We semi-normals, i.e. empaths (having empathy) are trying to figure out why Sociopaths, Psychopaths and Antisocials are the way they are and how we can protect ourselves from them. It's not just the mean kids we endured in grade school, middle school and high school!  Those people grew up and they not only are they still out there, they are all around us, in fact they are running the world through politics and business, or they are a sibling, a spouse, a coworker, a boss, a neighbor, even a best friend! Yikes.
So which book to start with? So many to choose from!
How about: 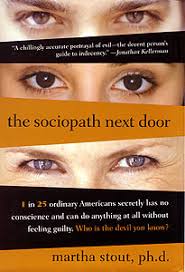 The Sociopath Next Door: The Ruthless Versus the Rest of Us by Martha Stout. Martha Stout is a Ph.D. from Harvard and an authority on this topic. This book came out in 2005 and states that Sociopaths may be 4% of the population. That is ONE person out of every 25 we meet!!! This well written, this hard-to-put-down book gives us the overview that makes us aware.
Next look into:

The Psychopath Test: A Journey Through the Madness Industry by Jon Ronson, author of the Men Who Stare at Goats, interviewed Psychopaths and people who have created the tests that diagnosed their conditions. He discovered that many people in power, such as business leaders and politicians, even world leaders exhibit psychopathic characteristics. It may be that these people, perhaps 1% of the population, have the wherewithall to get the job done, because they don't feel things the way normal people do.
A fascinating side note is that this author decided to take the Psychopath Test and found he, himself, was a psychopath. He told his large, loving and extended family of the results and his family agreed that they were not surprised. He did not connect emotionally the same way the others in the family did. He once missed a family event that was important, because he didn't care, but most interestingly, he found out that he is a cousin of the famous ax murderer, Lizzie Borden.......and 15 other murderers from the past in his clan. He wondered why he didn't turn out badly and figured that he has always been surrounded by a VERY loving family, so felt no inclination to act out. So, having the "Bad Seed" doesn't mean that you will necessarily turn out evil.
One of these books point out that Japan has fewer sociopaths, because of the societal pressures to conform. In Western countries, such as the United States, where individuality is more valued, your chance of becoming an active psychopath or sociopath is more likely.
Next book to try:

Confessions of a Sociopath: A Life Spent Hiding in Plain Sight by M. E. Thomas. It just came out in 2013.

M. E. Thomas (a pseudonym) has a blog, Sociopathworld.com. She is a law professor, a practicing Mormon, and not a convicted criminal. Her memoir is a chilling read. Since Sociopaths are such liars, one thinks twice about her seeming honesty about her condition. She attributes her ability to function in the world of empaths to her family, albeit disfunctional, but structured and loving in its way. She gives the history of the psychology world in defining this condition, which is now gravitating toward calling it Antisocial Personality Disorder. In truth the condition is a continuum, but none the less scary.

Of these three books, this one lets you into the mind of a functioning sociopath the best!

and/or start with the bigger question

Dark Nature: A Natural History of Evil by Lyall Watson, a zoologgist, who believes that evil, as we define it, is part of reality from subatomic levels, through to individuals, through entire societies. This 1996 book convincingly makes the case that such "evil" is a necessary evolutionary element. Our psychopaths cull out the weak in the same way that predatory big cats catch the weakest wildebeast.

All these titles and more on this topic are in Oakland Public Library. Reserve your copy now!