This week you can earn a raffle ticket in the Teen Summer Passport Program by taking a virtual tour of somewhere you've never been! Here are some places to start.

Feeling a bit trapped at home?  Well, this week's theme for summer programs at OPL is Global Society and while there are a lot of ways to earn a raffle ticket to fit this theme, we wanted to feature some virtual tours.

There are several places online that you can find photos and tours of places all over the world.  We really like this one, for example.  But, as you'll see below, YouTube has plenty to see, and there are tours in your own backyard that you can hit up, even during shelter-in-place.

Here are some examples, provided by three different staff members who work with teens at the library.  Some are near, some are further away, all are pretty fun to read and watch!

Backpacking in the High Sierra, California 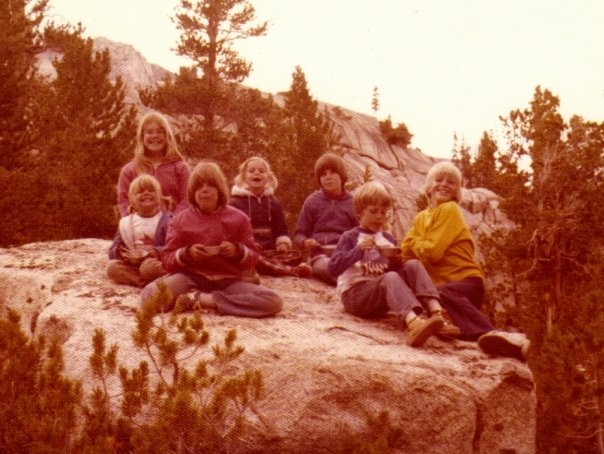 I grew up backpacking in the Sierra Nevada, a very large and tall mountain range a few hours drive from Oakland. By “backpacking” I mean putting everything we needed for several days into backpacks and hiking into the mountains far away from anything man-made. No buildings, no cars, no electricity, no phones (and no cell service when we started having cell phones).

Everything we needed for eating, sleeping, staying warm, first aid, entertainment, etc. had to be carried on our backs. We joined the family backpack trips once we were able to walk (though when we were really little we didn’t carry much and were often carried). In my family, we didn’t even use tents. We would put up tarps or very packable, light-weight pup tents on the rare occasions when it rained, but otherwise slept under the stars in our sleeping bags.

We have legendary stories of getting wet (sometimes the pup tents failed or we fell into the creek we were crossing), run-ins with bears (never a threat to us, only to our food supply), and getting lost (my dad is famous for his “short cuts”). But we never had any major problems, injuries or emergencies.

These trips were much more amazing than they were hard. The scenery was spectacular, the flowers gorgeous, and the animals graceful, adorable, or impressive. Our trips were times for story-telling and singing, family team-building and self-discovery. Imagine, having nothing but yourselves and the wilderness.

I don’t love backpacking the way others in my family do. But I understand, now, that these trips were a gift that few people are lucky and privileged enough to be given. This is slowly changing thanks to organizations such as Outdoor Afro. Bay Area Wilderness Training and Youth Outside specifically support outdoor adventures with low-income youth and youth of color in the Bay Area.

Here is a video of a relatively short backpacking trip in the Sierra Nevada a few years ago. (These are not people I know, I just chose one from the many on YouTube). You can get a good idea of the fun, the challenges, the beauty and the wonder of backpacking by watching.  Have fun!

Cancelled: A Dream Trip to Italy and Greece

Many students we know were relieved when school shut down in March, no thanks to Covid-19. Hello, sleeping in. Goodbye, rushing off to class before the bell.

Then the cold reality set in. Tweens and teens started realizing what they were missing.

No more lunch bunch. Or aimless wandering with friends after school.

For some, no more flirting.

And for seniors, scant chance to glide casually in your cap and gown past friends and family while they whoop-whoop too loud as your name gets called.

For Bay Area recent high school graduate, Heaven Jones, the biggest regret about the way her senior year fizzled out was having to cancel her 17-day class tour of Italy, Greece, and the Aegean Sea.

Three teachers had convinced her to sign up for this trip of a lifetime. “I was going off to college soon and I wanted to experience the world and use that experience in college,” she said, “and I wanted to taste all the food there.”

Hearing about this loss was enough to make us cry into our frappacinos, but Heaven is such a trooper that, instead, she helped me pick out the following highlights of her educational trip that never got off the ground.

Romeo and Juliet’s Balcony
This site is in Verona, Italy, a short ride from Milan, where the class would have landed. Word is that the largest group of people mailing love letters here is American teenagers! Apparently, it’s a real thing for tourists to lean in and rub the Juliet statue in the hopes that they’ll find eternal love. Try https://www.italyguides.it/en/veneto/verona/juliet-s-house or the video below.

Dante’s House
It’s more like a small museum in Florence dedicated to the works of Dante, considered Italy’s greatest poet. He wrote the epic Divine Comedy. Dante was a game-changer because he insisted on writing in the vernacular. This made his work accessible to all readers, not just the scholarly elites. Try this video:

Next, have fun noticing how close Italian is to Spanish!

Trivia Question: How many Dantes do you know? Next time you talk to one, let them know their name is Italian and dates back to the Middle Ages!

The Sistine Chapel
Onward to the Vatican City of Rome. Heaven’s class would have walked around the insides of this awesome building with its colorful frescoes wearing headphones that offer rich details of the history and art they were seeing, especially Michelangelo’s famous painting called “The Creation of Adam.”  Use the up arrow to find this treasure on the ceiling. http://www.museivaticani.va/content/museivaticani/en/collezioni/musei/cappella-sistina/tour-virtuale.html

Pompeii
Our intrepid Heaven was really curious about the Pompeii stop, further south, near Naples, because of stories she’d heard of this ancient city that was drowned in sizzling hot ash and rocks spewed from the towering volcano of Mount Vesuvius one day in 79 A.D. Her class would have explored partly buried, partly restored sites of this city. Got 18 minutes? Try this virtual tour.

And for a still shot of gorgeous carvings and figurines from an ancient sorceress’s tool kit in Pompeii, scroll down to page 2 here. https://www.smithsonianmag.com/smart-news/take-virtual-tour-these-newly-excavated-pompeiian-homes-180974654/

Olympia
On the ninth day of the tour, the class would have taken an overnight ferry from Sorrento in Italy to Patras, Greece, next heading to Tolo and Olympia, the site of the first Olympic games ever. https://yougoculture.com/virtual-tour/olympia/ or https://www.olympiabackintime.com/

The Parthenon
"I learned about Athena [the Greek goddess of wisdom and war] when I was younger, so I really wanted to see the temple built to her,” says Heaven. That temple is called the Parthenon, the symbolic seat of democracy, and one of several famous buildings on the fortified hill area known as The Acropolis, overlooking Athens, Greece.

The You Go Culture website tells us that being there in person is the only true way to experience “the Acropolis’ magical and transcendent existence.”  Something about seeing firsthand how harmoniously the large marble stones were carved and put together are part of the allure. Still, some snapshots: https://www.youvisit.com/tour/carpy444/99636

Aegean Sea Cruise
After a few days of smelling the ancient dust while absorbing all this history, the students would have been ready for the relaxing, three-day, two-stops excursion that was to follow.

The Temple of Apollo at Delphi
On the 16th and last full day of the tour (before the day-long flights home), Heaven says she was looking forward to visiting Delphi, too, “because it was the place where people would go to get prophesies.”

Sigh. Well at least now, Heaven’s class can enjoy these online snippets of the trip that might have been. Ciao/arrivederci/addio/antio sas!

Did you know there is one trail where you can walk or bike in the Bay Area, our own backyard? Neither did I! Who knew?

It is called the San Francisco Bay Trails. It is 500 miles around the Bay Area, 47 cites, 9 counties, and 25 trails where you can walk and bike. There is access to walk or bike on 7 of the bridges that surround the Bay Area including:  the Eastern Span of the Bay Bridge, the Golden Gate, and the Richmond/San Rafael Bridge.

As you travel on the trails, not only do you get to be a part of nature but you learn something about nature, the shorelines, the communities, landmarks, and cities in the Bay. Be sure to pay attention to maps and the weather.

As someone who loves to take walks, I went on a walk. My journey took me to trail 11.

This trail begins in Emeryville at Shellmoud (by IKEA) and takes you to Yuerba Buena Island. It is about a 4 mile trip.

Along the way, I saw flowers, how the freeways connect (I even walked under the freeway overpasses), the cranes that surround the Port of Oakland, the water plants, and, of course, I kept going until I reached to the bridge. I did not walk on the whole Eastern Span of the bridge because I’m scared of heights. However, I did walk to the point just before the land and water separate. There is an Observation Pier before you walk on the bridge where you can overlook the Bay. There are plans to continue the trail to Treasure Island. It was a beautiful day in the backyard.

View of the Bay from the bridge

I have yet to visit other trails even though I know the areas, especially in San Leandro and Oakland. Even so, I thought it would nice to include one more trail.  There are a bunch to pick from; 500 miles that covers 47 cities and 25 trails that go as far as San Rafael. That’s a lot! So, I went with trail 10. This one takes you through Crown Beach in Alameda and leads to Jack London Square.

This trial takes you through Alameda and Oakland.

You begin at the end of Bay Farm Island in Alameda’s Towata Park. From there you would follow the trail to Crown Beach aka Alameda Beach. You can enjoy a nice walk that leads to beach.

While at the beach you can visit Crab Cove Visitor Center and Aquarium and learn about marine life. Who knew this was here? Not I.

Along the way you will end up at the Alameda Ferry Terminal. The trail jumps over to Oakland via the Fruitvale or High Street Bridge. There you can visit Union Park, Embarcadero Cove, and Estuary Park. More water fronts.

Then head over to Lake Merritt (only way to get to is through the streets) to see more water and take in the view of the historic landmark. The final leg of the trail leads to Jack London Square where you can learn more history about the waterfront, entertainment like the movie theater, food, drinks, and the ferry that takes you to San Francisco’s Pier 39.

There is much more to explore. I hope you have fun enjoying our own backyard. I know I did.