In honor of this year’s Black History Month theme, “African Americans in Times of War,” the African American Museum & Library at Oakland will feature events and community blog posts in February that tell the stories African Africans’ valiant and brave contributions to our country both at home and abroad in war time.

World War II brought profound changes to the African American community in Oakland and across the Bay Area. In the first four years of the war, the African American population of Oakland bloomed from 8,462 in 1940 to 21, 770 by 1944 to a considerable 47,562 residents by 1950.  Some families were beckoned to the Bay Area by government recruiters that scoured the South and Midwest looking for workers to fill the manpower shortage in war industries caused by the war. But most families moved here based on word of mouth from family members and Pullman Porters who touted the area’s plentiful jobs, good wages, and better opportunities for families seeking to escape the brutal social conditions of the American South. Most African Americans migrants came from four states – Texas, Arkansas, Louisiana, and Oklahoma – and some referred to the trains out West as ‘Liberty trains.’ Economic opportunities for African Americans expanded exponentially following Franklin D. Roosevelt’s Executive Order 8802 prohibiting racial discrimination in hiring in federal war industries. Roosevelt was pressured to issue the order following criticism from A. Philip Randolph and Walter White threatening a March on Washington in 1941 if the order was not issued. 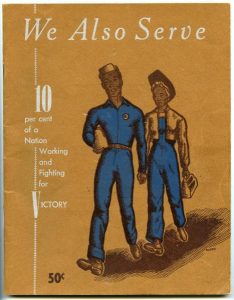 While President Roosevelt’s Executive Order 8802 opened the door for westward migration and employment of African Americans during the war, it did not remove most of the economic and racial barriers confronting migrants when they arrived in California. The publication We Also Serve: 10 per cent of a nation working and fighting for victory was published in 1944 at the height of this migration and integration of African Americans into the Bay Area war industry. The pamphlet was a joint project of the popular Bay Area band leader Ben Watkins, pioneer African American publisher Charles F. Tilghman, and Spencer W. Jourdan, labor leader and secretary of the Local A-26 of the Boiler Maker’s Union, the first African American union for shipyard workers in the Bay Area. The pamphlet’s purpose was “dedicated to the task of describing, edifying, and stimulating the activities and progress of the Negro in business and industry; and to show the part that the Negro is playing in winning the war.”

The pamphlet’s publication was funded by 68 donors from Berkeley, Oakland, and Alameda and featured articles written by many of the labor and civil rights leaders that would make a lasting impact on the African American community in the post-war period. Local union representatives Harold Lumsden, James Borman, Harry Pierson, and Spencer Jourdan all wrote articles that attest to the era’s measured optimism that the entry of African American laborers into the war industry’s skilled trades and unions would equate to long-term prosperity. Frances Albrier, who led the fight for African American women to hired in the shipyards, contributed an article, “Women in America,” speaking to the double discrimination faced by black women in the war years, “as women, along with other women of the nation, they had to overcome prejudices for being a woman who dared enter a man’s world. She did not ask for sympathy, but equality.” 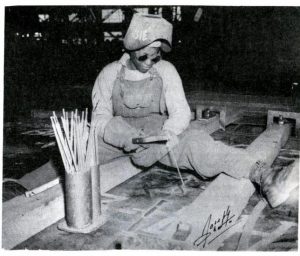 Despite the numerous hurdles faced by those that worked in the war industries during World War II, We Also Serve demonstrates the pride and confidence that accompanied the expanded economic opportunity of the war years. The editors of We Also Serve encouraged their readers to patronize the many black businesses that purchased advertising in the pamphlet. An article by George Lince, “Negro Progress,” recites a long list of African American social and economic accomplishments as “no race has done so much in so little time as the Negro.” There are photographs and transcripts of the christenings of two liberty ships dedicated to black pioneers – the USS George Washington Carver which was sponsored by the actress and singer Lena Horne and the USS Toussaint L’Ouverture, the liberator of Haiti. The pamphlet also features a history of the United Consumers and Producers, Inc., a business cooperative established in 1943 to provide credit and assistance to African Americans seeking housing. The corporation was able to purchase the Pyramid Club Hotel and Dining Room at 1559 7th St. to help provide housing for over 300 defense workers. 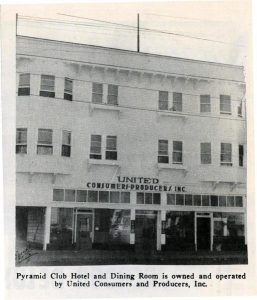 But not all of the contributors to We Also Serve were as optimistic about the post-war era. Rev. Roy Nichols, a prominent minister and civil rights leader following the war, wrote about his program for the post-war period in “Negrealism.” He defines ‘Negrealism’ as “in spite of multiple efforts in the direction of integration, residential segregation, auxiliary union locals [black unions], and “duration employment” are sure signs that Negro leaders had best make some “salvation plans” for the darker brothers.” His plan for ‘Negrealism’ in the post-war period included the economic, political, religious, and social independence of black communities. He concluded with a four point plan for the social and economic advancement of African Americans dependent on: 1) businessmen and women to initiate cooperative business ventures, 2) black politicians that work for the public good, 3) Church leaders that use the church as an instrument for economic, social, and political betterment, 4) understanding for those culturally ‘handicapped.’ His final warning was particular prescient for the years ahead: “when Negroes make segregation a menace to white supremacy; when we make of the stumbling block a stepping stone; the very interests that fought to create the ghetto, will favor integration…and perhaps assimilation! If that’s what you want.”

Watkins, Ben (ed.) We Also Serve: 10 per cent of a nation working and fighting for victory, Tilghman Press (Oakland, Calif.) 1944.