Collections focused on music from our Archives and Library

African Americans in the Art of Music 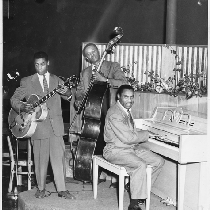 African Americans have made significant contributions to the art of music in many genres. From gospel legends Shirley Ceasar to Motown legends Diana Ross and the Supremes, Martha Reeves and the Vandellas, and many more. The Bay Area has also produced many legends from Oakland-born artist Sheila E., to rap/hip hop artists Too Short, M.C. Hammer, Digital Underground, and R&B artist Goapele.

Seeing the need to have the accomplishments of African American music and its musicians recognized, music producer Kenny Gamble and broadcast executive Ed Wright, crafted an idea of celebrating the contributions of African Americans musicians to the art of music while also taking black music globally. Their efforts resulted in President Jimmy Carter proclaiming June as Black Music Month. 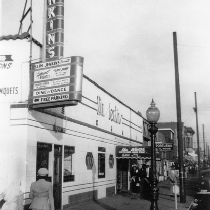 The music of African Americans can be traced back to the days of slavery. In the fields as slaves were working you could hear them singing songs to pass the time. These songs were a way for them to share their life stories. Many slave owners began to forbid their workers from using their own languages to chant or use drums. Owners believed this was a form of communication, getting the message out to other slaves about impending escapes or insurrections.

One musical genre that has roots back to the days of slavery is gospel music. As slaves became Christians, a religion forced upon them, they began singing hymns later termed spirituals. These spirituals later evolved into gospel music.  With the abolition of slavery, a new form of music began to emerge.  Free blacks found themselves expressing their disappointment in a post-slavery society. This genre became known as the blues.

The African American Museum and Library at Oakland not only has numerous archival collections that include oral histories of Bay Area musicians but also library materials relating to African Americans in the field of music. Come and view some of the following titles in our library and archives department related to African American music.

Our Archives Department has a number of collections relating to African American music and the music scene.

From the Reference Library:

Our reference library has numerous titles that document the history of African American music. One title in particular, Lift Every Voice by Burton W. Peretti traces the roots of black music in Africa from the end of slavery in the United States to the present day. The book documents the different musical genres such as spirituals, ragtime, blues, jazz, gospel, rhythm and blues, rock, soul, and hip-hop—as well as black contributions to classical, country, and other American music forms.

In addition to the vast number of books on music legends the Reference Library also has a number of pictorials books that document the history of African American music and musicians with full-page photos.

The following books can be viewed in our OVERSIZE collection in the library:

The Blue Note Years: The Jazz Photography of Francis Wolff

A book of photos from the collection of Blue Note founder Francis Wolff who photographs rehearsals and recording sessions of many Jazz greats over 25 years such as John Coltrane and Miles Davis.

Over Time: The Jazz Photographs of Milt Hinton

Other titles of note in our library collection include:

Who Shot Ya? Three Decades of Hip Hop Photography

Photography documenting the hip hop scene from the 1970s Cold Crush Brothers to the days of Kurtis Blow, The Fat Boys and Run DMC of the 1980s to the 90s rap artist Tupac and Biggie and early 2000s artist such as DMX.

The Illustrated Story of Jazz

Spend your day learning about the history of jazz, its roots, and beginnings as Shadwick takes you on a journey through classic jazz, swing, bebop to the days of cool jazz and beyond.

Satchmo: The Wonderful World of Art of Louis Armstrong

This book tells the life story of Louis Armstrong through colorful pictures of using his writings, scrapbooks, and artwork.

Did you know that AAMLO now has a YouTube page to view archival footage? Subscribe TODAY at African American Museum and Library at Oakland.

Check this video out from the Jay Payton Show with the below link....