Thanks to Sean, the Archivist at the African American Museum & Library at Oakland for this amazing post.  Have you heard of C.L. Dellums? 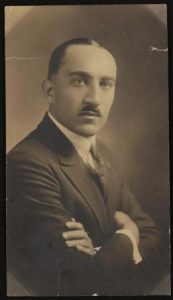 When C.L. (Cottrell Laurence) Dellums arrived in Oakland, California in 1923, he had dreams of one day attending law school at the University of California. He came to California for many of the same reasons other African Americans came to the state - to escape the segregation and racism of the South in the hope of finding social and economic equality.

But Dellums soon realized that things were not much different in California than in Texas, and the only jobs open to African Americans were low-paying positions in the service sector as waiters, janitors, laborers, and railway porters. Dellums eventually found a job as a railway porter with the Pullman Company, planning to use his salary as a porter to fund his education. He quickly realized that his salary and work schedule as a porter would not allow him to go to law school, and he was appalled by the numerous injustices suffered by those working the trains. By 1925, C.L. Dellums had tired of the inadequate salary and frequently demeaning working conditions. He urged his fellow porters to join him in fighting for better working conditions. With the arrival of A. Philip Randolph in Oakland in the fall of 1925, Dellums discovered a vehicle for achieving his aims, the newly formed Brotherhood of Sleeping Car Porters (BSCP). 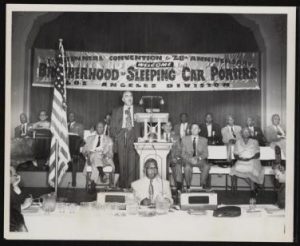 Dellums would spent a large part of the next 65 years of his life advocating and fighting for better working conditions for porters as part of the Brotherhood. After he was fired by the Pullman Company in 1927 for his union activities with the Brotherhood, he continued his work with the BSCP and was named director of the BSCP's operations on the West Coast and National Vice-President in 1929. Dellums and the BSCP would go on to win many battles over wages and working conditions with the Pullman Company eventually being officially recognized by company management in 1937. 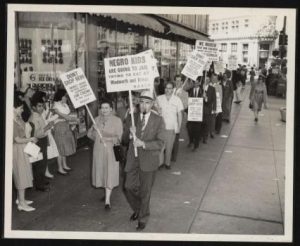 In addition to his work with the unions, Dellums also worked closely with civic organizations and legislature to fight for civil rights. He was elected the first chairman of the Alameda County Branch of the N.A.A.C.P. and led many of the groups efforts for fair housing and employment under the laws. After four students from the North Carolina Agricultural and Technical State University were refused service at the lunch counter at Woolworth department store in Greensboro, North Carolina, Dellums led a boycott and protest of Kress and Woolworth stores in the Bay Area. A tireless champion of the rights of workers and African Americans, Dellums active with civil rights organizations and unions until his death in 1989 at the age of 89. 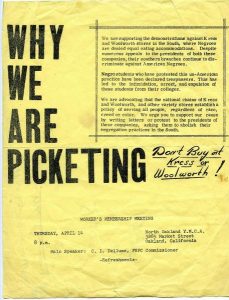 The African American Museum & Library at Oakland recently completed a digitization project to the Cottrell Laurence Papers available online. The collection serves as an excellent resource for students and the public to learn about the significant role C.L. Dellums played in the history of civil rights for African Americans in California and the Brotherhood of Sleeping Car Porters. The historical items were digitized and made available online with a Library Services and Technology Act (LSTA) grant from the California State Library and are available online through the California Digital Library’s Calisphere web site.