The African American Museum and Library at Oakland recognizes the contributions of the Brotherhood of Sleeping Car Porters this Labor Day Weekend. 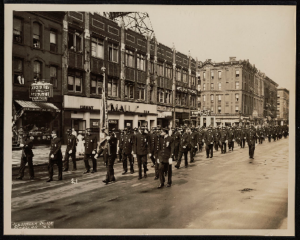 This week marks the 93rd Anniversary of the founding of the Brotherhood of Sleeping Car Porters.  Unions have played a significant role in providing protections for American people. However, some unions, such as the American Federation of Labor refused to let African Americans be a part of their unions. As a result, African Americans found it difficult to find work in certain occupation. Without union representation, union jobs would not hire them as workers.

During the 19th century, one of the biggest corporations in America was the Pullman Company. George Pullman developed the idea of having a luxury train service where passengers could get to and from their destinations in less cramped, uncomfortable conditions. Pullman’s idea was to use the services of African Americans to serve as servants on the trains. He believed that African Americans would work as servants because they were used to working for free. African Americans also had the experience of being slaves and therefore, knew the “societal distinction” between black and white. Knowing this distinction would make it easier for porters to serve in a servant role.

By 1920 the Pullman Company was one of the largest employers of African Americans. These positions were considered the “best jobs” for African Americans. Upon receiving word from friends and families, other African American families migrated to California to take jobs as Pullman Porters as well. These African American men came in hopes of a better life and opportunities for their families. The average pay during the 1920s was just $15 a week. To make ends meet many porters found themselves working 60 hours or more a week. The porters supplemented their earnings with the tips they earned while on duty.

Previous efforts to organize a union were unsuccessful because of the threats from the Pullman Company. Anyone who attempted to join this union would be fired. Pullman made good on this promise firing anyone who joined this union. The Porters waged a 12 years fight for better wages and working conditions. It culminated with the Pullman Porters becoming the first African American group to be recognized by a major corporation as a union.

Join us at the African American Museum and Library Saturday September 1, 2018 as we celebrate Labor Day and recognize the role Pullman Porters played in the labor movement. Also check out the following links to collections in our archives department on the Pullman Porters:

On Calisphere you can find documents pertaining to the Pullman Porters.

Pullman Porters ATTENTION: THIS IS FOR YOU!