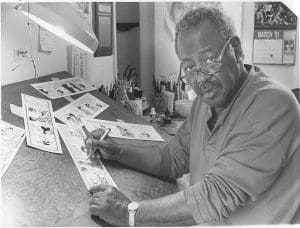 This week marks the anniversary of legendary cartoonist Morrie Turner's launch of Wee Pals.  The son of a Pullman Porter, Morris Turner, was born in Oakland, California on December 11, 1923. A product of the Oakland school system he attended Cole Elementary and McClymonds High School before completing his studies at Berkeley High School. Turner spent his entire career as the syndicated cartoonist of the WeePals, a multiethnic cartoon strip.

Turner began drawing at the age of 10 as a means of communication. With no TV, and paper from the local butcher shop, he would listen to shows and plays on the radio and draw what he heard. By age 14 he decided he wanted to be a cartoonist.  His father was not happy with his desired profession as it was not manly. As his mother would put up her son’s artistic work, his father would take them down. Turner was undeterred by his father’s disapproval. During his childhood, Turner would draw on religious cards he would get from Sunday school class and take crayons and old curtains and reproduce drawings from those cards. 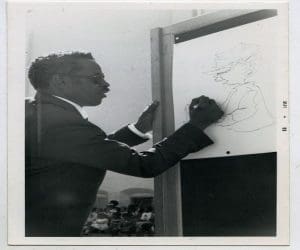 An ambitious Turner wanting to get his start in cartooning found himself browsing newsstands seeking magazines that had cartoons in them.  He sent his strips to each of these magazines in hopes of getting a response, a process that continued for over a year.

The first month of Turner’s career saw him working with an abundance of content and ideas that would race through his head. After the first month, he began to run out of ideas. Nervous about the lack of ideas to use for his comic strip, Turner found himself going through the dictionary finding words and giving them funny definitions.  The idea worked. The first comic Turner was paid $5 for a cartoon produced for Baker’s Helper magazine.

Turner’s work both in comics and books reflected stories that focused on issues affecting the African American community including diseases such as AIDS and sickle cell anemia. In his book “Where’s Herbie? A Sickle Cell Anemia Story and Coloring Book”, Turner creates a coloring book with a storyline where children are able to both interact and learn at the same time. 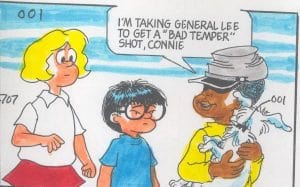 Morrie Turner’s comics reflected the social commentary and events of the day. On February 15, 1965, at the height of the Civil Rights movement, Turner created the WeePals. Wee Pals became a syndicated comic strip in newspapers across the country and featured a multiethnic cast of characters that represent different cultures.  He considered his cartoon to be the “Black Peanuts”, an offshoot of legendary Peanuts creator Charles Schultz.

As a part of the comic community, Turner was an advocate who led the push for other cartoonists to integrate their strips. When African Americans were portrayed in comic strips many portrayed them as black-faced characters with big white lips.  Turner wanted to change this stereotype. During a gathering of California cartoonists, Turner met legendary Peanuts legend Charles Schulz. He asked Schulz why he didn’t have black kids in his comic strip. In conversation, Schulz encouraged Morrie to create an integrated script. Turner began a campaign to end the all-white character comic strips. While campaigning for change in the comic industry, he recognized that his comic strips were all Black.  Turner decided that he had to be the first to integrate his own strip.

One year during “Negro History Month,” Turner added Soul Corner to accompany his weekly comic strip. After such a positive response, he decided to continue the tradition. Soul Corner would feature an individual who made contributions to the African American community when they were alive. Soul Corner always featured deceased individuals as his strips were produced 13 weeks in advance. By the time the strip made it to print a lot could have happened in a person’s profile. 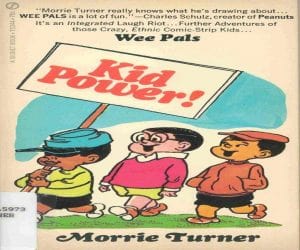 For more information on cartoonist Morrie Turner including interviews, photographs, and more view:

The interview of Morrie Turner on Calisphere at:

The collection of Morrie Turner on the Online Archive of California at: