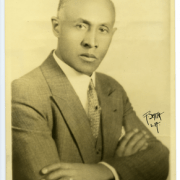 Today is Election Day in the United States of America. Your vote counts. On this Election Day, the African American Museum and Library at Oakland profiles political figure Frederick Madison Roberts. Roberts was born in Chillicothe, Ohio in 1880 to Andrew J. and Ellen Wales Roberts. From his mother, he acquired the distinction of being the great-grandson of Sally Hemings, a woman reputed to be the mistress of Thomas Jefferson.

There were two milestones in Roberts’ distinguished life. First, Roberts was the first African American to graduate from Los Angeles High School. He went on to attend the University of Southern California for one semester and then transferred to Colorado College, where he received an A.B. in legal studies. He also served in his first civic office, acting as deputy assessor of El Paso County, Colorado. 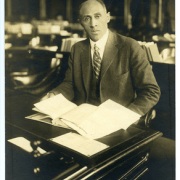 Upon moving back to California, Roberts ran for the Republican seat for the 74th District in the state legislature. His victory in this race proved to be the second milestone, for he became the first African American to hold a seat in the California State Legislature. He held this seat continuously for ten years and then after reapportionment occurred, he was elected from the 62nd District for three more terms. In 1934, he lost his seat to Democrat Augustus F. Hawkins. Politics continued to interest him, however, and in 1946, he became the Republican nominee for the 14th District seat in the United States House of Representatives. He lost the election to Democratic candidate Helen Gahagan Douglas but remained active in the Republican Party up until his death.

In addition to his careers as a politician, newspaper publisher, and mortician, Roberts also played an important role in civic and religious affairs. He acted as a director for local branches of the National Association for the Advancement of Colored People, the Y.M.C.A., the Urban League, and the Outdoor Health Association. He frequently gave speeches at events sponsored by the Woman's Political Study Club.

Roberts married his wife, Pearl Willard Hinds, on November 30, 1921. They had two daughters, Gloria and Patricia. He died suddenly in 1952 after suffering a fatal injury in an automobile accident.

For more information on Frederick Madison Roberts please see the African American Museum and Library’s Roberts Family Papers on the Online Archive of California or click the link here.