Celebrating this Texas holiday in the Bay Area. A post by Donielle Woods, Librarian at the African American Museum and Library.

Although our local festival has been cancelled due to COVID-19, we’re still looking forward to June 19th, affectionately referred to as Juneteenth, a holiday within the African-American community that celebrates the end of slavery in the United States.

The Emancipation Proclamation (available digitally from our National Archives) was signed by President Abraham Lincoln and declared that as of January 1, 1863, all slaves in the states currently engaged in rebellion against the Union “shall be then, thenceforward, and forever free.”

However, it took a while to enact! Union Troops traveled throughout the South delivering the decree that all enslaved persons were now free. Many Southern states have their own dates and celebration of the end of slavery. It took federal troops over 2 years to reach the state of Texas. Union troops arrived in Galveston, Texas on June 19, 1865 to announce that the enslaved were now free and took control of the state to ensure it. The year following, freedmen in Texas organized the first of what became the annual celebration of "Jubilee Day" on June 19. 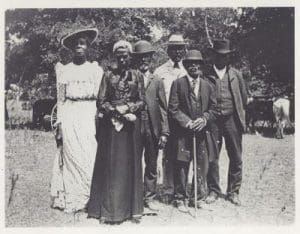 How did this Texas holiday arrive in Oakland?

Between 1916 and 1970 millions of African Americans moved from the segregated “Jim Crow” south in hope of a better life and opportunities in the “North”. This mass movement is known as The Great Migration. Typically, their location in the South determined where most migrated. For example, African Americans from North Carolina were more likely to move to places like New York and New Jersey; African Americans from Mississippi and Alabama moved to places like Chicago and Detroit. One of the major factors that drew African Americans to these cities were the industries that openly recruited them and encouraged them to move by offering them stable employment and an opportunity to achieve the “American Dream”. 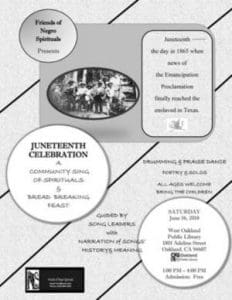 Here at the Oakland Public Library, we have gotten used to hosting Friends of Negro Spirituals for a sing along and celebration at our West Oakland branch. We’re sorry this event won’t happen this year but stay tuned for details of a Zoom celebration in early July.

Celebrations, Past and Present