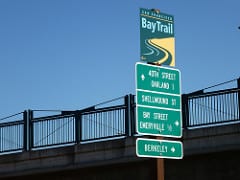 Long prior to the tech boom, the names Oakland, Emeryville, Berkeley, and the United States of America, before Spanish missions, were the native Ohlone peoples who have been inhabiting what we now know as the Bay Area for thousands of years. Ohlone is a loose term used to name the dozens of indigenous groups, with distinct dialects, that have lived and given to this land before European invasion.

In the early 20th century, over 425 shellmounds were identified in the early twentieth century, opens a new window throughout the Bay Area. When the redevelopment of the Bay Area happened with the growth of industry and migration, shellmounds were often desecrated, flattened and/or used for paving and building. Essentially, shellmounds are human-made sacred sites that grew over thousands of years; layers upon layers of earth, burials, shells, and other organic materials that were crucial to Native villages left sometimes huge, opens a new window mounds that told rich stories of what life was like before European contact. If you are not Native, imagine the cemetery where all your ancestors lay being used to pave roads and host fast-food stores. Furthermore, imagine that this cemetery is one of the only ways which you can reconnect to your past and learn your history. Considering that (much younger) historic houses, opens a new window and other artifacts from colonial times and missions, opens a new window are recognized and preserved today, the fight to preserve Native sacred sites that hold thousands of years of history is a no-brainer.

According to Gould, the largest shellmound was in Emeryville and the oldest one is in West Berkeley. If you live or have ever visited the Bay Area, it is highly likely that you have stepped or driven over a shellmound or a road paved with shellmound remains; even if the mounds are not visibly above ground, layers of shellmound are probably still present underground. Human remains from burials still show up during construction, such as Berkeley, in 2016, opens a new window.

Because of colonizer and settler-introduced diseases, intentional violence against Native populations, and state-sponsored massacres of Native peoples in California, opens a new window, the population of Ohlone peoples in the Bay Area dwindled. Preserving what remains of Native history is paramount when so much has already been destroyed. We hope that during what many Americans recognize as Thanksgiving, you research your local Native history, contribute to current Native history preservation efforts, and/or assist other efforts that honor and fight for the legacy of Native peoples of the land you stand on.

Listen to and read the KQED Story on Shellmounds in the Bay Area here, opens a new window.

Look at 150 years of changes to the landscape of the West Berkeley Shellmound here, opens a new window. 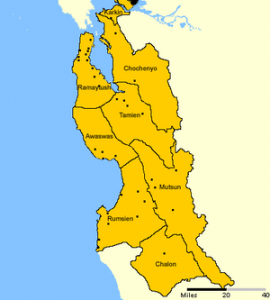