I want to thank Brian Guenther, the Branch Manager at our amazing Martin Luther King Jr. Branch, for his guest post today.  The following words are his, not mine.

We love bikes at OPL. 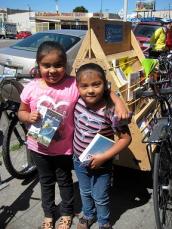 My theory is that it’s because, like libraries, bikes represent a kind of freedom that is accessible to people of most ages. Or, maybe it’s because they’re another economic way to see more of your world. Maybe it’s just because they’re fun. Whatever the reason, bikes and biking are a big part of the Oakland Public Library culture.

You might’ve seen our Bike Library around town, we celebrate National Bike Month with a ton of bike related activities and events, and branches provide bike locks and pumps for those in need. We even host fix-it clinics for folks needing help with repairs. 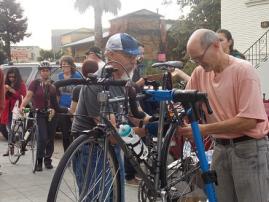 I had this all in the back of my head when I was asked how I would feel about a shipping container being parked at the back of the Martin Luther King, Jr. Branch. 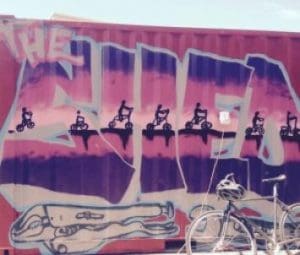 Just a few weeks later we were having a kick-off event for shipping container, now christened “The Shed.”

If you ask me, this partnership between OPL and the Scraper Bike Team makes total sense.

At the kick-off event, 81st Ave’s, Anthony Propernick, talked about how it is the mission of librarians to facilitate knowledge in their communities and how we’re doing just that by giving greater access to these bike repair and customization experts.

Scraper Bike founder, Tyone “Baybe Champ” Stevenson and president, Reggie “Chefboy RB” Burnett are idolized in Oakland not just because they ride around on flashy bikes seven feet in the air and pump out the bass as they ride through the city. They are looked up to because they care about the youth here, want to see them succeed, and give so much of themselves to see that that happens. A perfect fit for the library.

For more about the Scraper Bike Team and the Shed check out this fabulous Oakland Voices article and this amazing video produced by CNN’s Great Big Story Project: