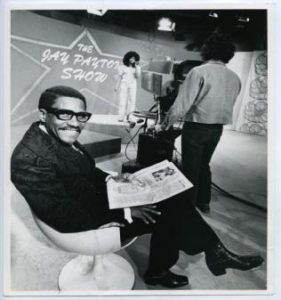 It was forty-five years ago when Jay Payton, a well-known Bay Area emcee and music promoter, launched his own music and dance variety, Soul Is (later named “The Jay Payton Show”) on Oakland’s KEMO-TV. The variety show was modeled in part on Don Cornelius’ Soul Train, which had premiered two years earlier and created a model for a youth-focused music and dance variety show that promoted African American performers on a national stage.

Until recently it was commonly believed that there were no existent tapes of the Jay Payton Show. As Thomas Guzman-Sanchez remarked in his 2012 book on underground dance, “it appears that the show master tape recordings were recorded over by Jay Payton to save on production costs.” So we were excited to receive two original master 2’’ inch quad tapes containing two episodes of the Jay Payton Show that originally aired on KEMO-TV in 1976.

The master tapes were donated to the museum in 2016 by the family of Jay Payton. The episodes feature an interview with Lenny Williams of Tower of Power and performances by Fresh, Joe Washington & Wash, The Saul Serenade, Graham Central Station. They are particularly significant for their footage of dance routines by The Black Resurgents, a dance troupe formed by students at Castlemont High School in East Oakland that combined parts of the boogaloo and the robot that would influence the next generation of hip hop artists and dancers.

The African American Museum & Library at Oakland was able to digitize the two tapes through a grant from the California Audiovisual Preservation Project with video hosting by the Internet Archive.