Listen to Eleanor Wikstrom perform her poem, "Too Good", and find a printable version of her inspiring words.

PDF of poem here: Too Good

Dr. Ford was receiving The YWCA Empowerment Award and said, “It’s funny, I was inspired by Anita Hill when I was deciding whether to testify but it didn’t occur to me at the time that I would be inspiring anyone else,” Ford said. “Eleanor, I couldn’t ask for a greater gift than to know I inspired your poem.” 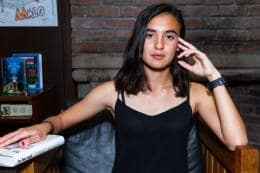 Eleanor is an Oakland native who has been writing prose and poetry since she could form sentences. Currently a senior at Skyline High School, Eleanor is involved in several clubs and a co-founder of the organization Oakland Students for Public Education, which empowers OUSD students to advocate for public education reform at the Capitol. She is also the cross country/track team captain and holds multiple all-time records for the city of Oakland in the distance events. An avid writer, Eleanor has won numerous awards for prose and poetry, including Youth Activist Award from the California Teachers’ Association, and was named a 2020 YoungArts Finalist in Writing / Spoken Word. This past May she partnered with composer Dominick DiOrio and the Oakland Gay Men's Chorus to premiere a new choral piece using the text of one of her poems, which has been selected for publication by the Hal Leonard Music Corporation. As the current Oakland Youth Vice Poet Laureate, Eleanor is excited to spend her senior year harnessing the evocative power of language to promote art and activism in her community and beyond.

If you would like to book Eleanor, the current Oakland Youth Poet Laureate, Samuel Getachew, please do so here:  http://www.oaklandlibrary.org/yplbooking, opens a new window