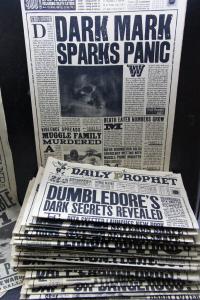 Before fake news and alternative facts there was … The Quibbler and The Daily Prophet. Yes, I am talking about the wizarding world of journalism. Bear with me.

For those who skipped the Harry Potter series, The Quibbler was Rowling’s storyline about a tabloid complete with sensational headlines, paparazzi and misleading (even fake) stories. The Daily Prophet, on the other hand, shared government-sponsored news, replete with alternative facts and spin control from The Ministry of Magic.

Imagine if Harry Potter readers graduated to Book 7 having gained media literacy skills from the stories. Sadly, the books’ negative depiction of media is troubling – both because it’s based in some truth and because it’s incomplete, leaving readers with a near total distrust of journalism. Sound familiar?

Lest we blame J.K. Rowling for the rise of fake news, it’s time to brush up on our media smarts. Oakland librarians can get you started.

Here are a few tools we recommend:

No matter who makes the news, it also matters who owns the news. Find out which companies own what, opens a new window.

And don’t forget to READ FREELY and critically: Oakland Library offers free access to the New York Times digital edition, opens a new window and many more magazine and newspaper databases, opens a new window. As well as lots of great books:

Truth, Lies and Quibblers: Media Literacy for a New Era